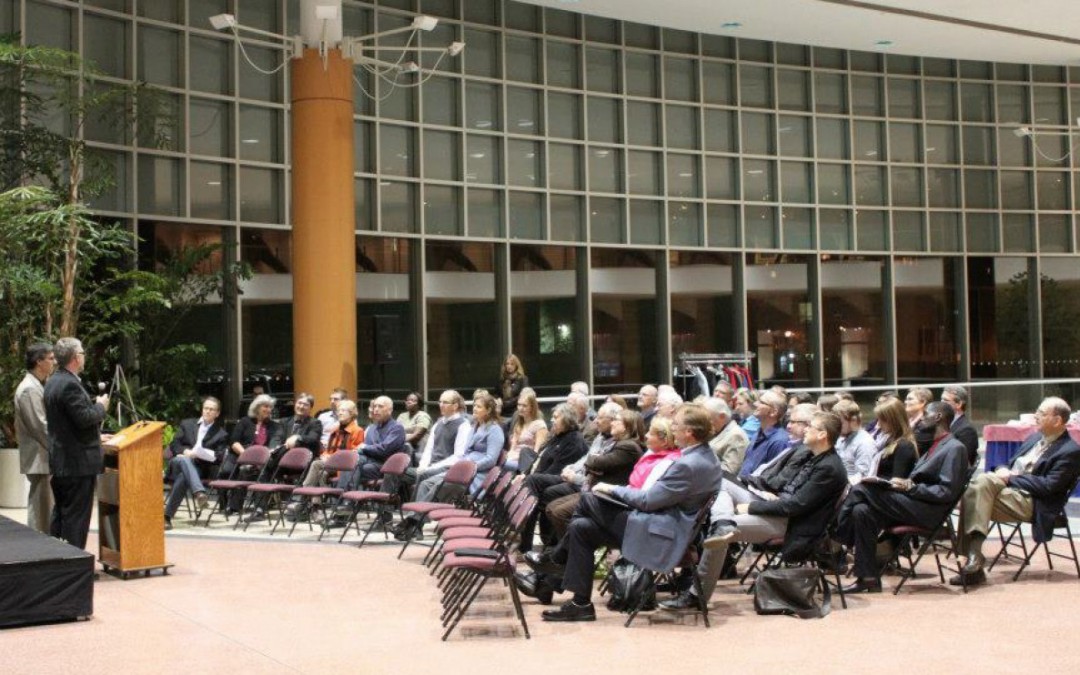 Love Ottawa was officially re-launched at the Ottawa City Hall on Oct. 24th.  A group of over 50 core supporters gathered at the invitation of Mark Peterkins(One Way Ministries) for a commissioning service of the new team.

All the active participants had been previous leaders on the Mission Ottawa team.  David Crawley, a former chair began with a survey of the last 19 years of the history of unity in the city starting with the first March for Jesus in 1993.

Alain Caronbrought greetings and powerful prayers from the Church in our sister city of Gatineau.  He shared the striking coincidence of how the city-reaching effort there recently renamed themselves “J’aime Gatineau.”

Our new executive team were introduced and each one shared about what they would be developing and what they were excited about as Love Ottawa began its new chapter.  Dave Harder, Ken Roth, Gerry Organ, Kerry Kronberg and Richard Long then received a challenge from Doug Ward who called back David Crawley and Alain Caron to pray over the new team.

After an explanation of the need for financial support for the work, Richard  and Kerry and their families were called up

for prayers of commissioning led by Ken and Lois Hall.  This long-standing pastoral couple have mentored and encouraged leaders for over 40 years in our Ottawa.  A number of others added their prayers as the whole crowd stood to bless the newly dedicated director and associate director.

Refreshments organized by the One Way team allowed all the attendees to stay and chat in the wonderful atmosphere in the Jean Pigott room.  It was the perfect setting for the re-launch of this city-reaching ministry which hopes to gather up the combined efforts and talents of all the churches in Ottawa.

Start receiving the latest news and updates about our Events: